On the outskirts of Eugene, heading North on Coburg Road. Nice bike lane practically all the way to Corvallis. Eugene itself has
scores of miles of dedicated bike paths, plus many more like this. This was my favorite part of the days ride, cool, nice bike paths
and I was feeling fresh and lively, unlike later that morning when it turned into more of a dead tired feeling while being
roasted into a raisin by the sun.

Bob Goss on the move. This shot was taken in fairly low light and while riding. People, don't try this at home! We're professionals!

One of our early rest stops. Brian kept up an incredible pace all day. He kept his breaks short, to about five minutes, and never
let up. It was very easy to keep up with him early in the day while I was fresh, but later after many miles, it was a challenge.
We drove our bikes 47 miles on day one with temperatures reaching into the high nineties by the time we finished around 11 am.

Barely 8:00 in the morning on the first day and we're already getting in trouble with the police! Arrived to find our lead riders
milling about and trying to look innocent. It seems that our presence in the front tripped some motion detector and the church
alarm went off. While we were laughing at our situation, the cops pulled in! We could hardly stop laughing as we tried to
explain to the cop. (She cracked a smile!). Turns out somebody had left their keys in the front door and it was unlocked.

Just a little later, Ethan Crowell and Jim McCarren caught up with us by car all the way from Alabama! We managed to round up
two additional bikes and they joined us!
In the picture above we see from left to right, Billy Kelly, Dave Tschoepe, Lane Anderson, Jeff Chase peeking over Lanes shoulder,
Joe Hatcher, Jim McCarren and Ethan Crowell.

Another view of our shady rest spot, and Brian getting antsy to get going! Brian had to keep his breaks under 5 minutes to keep
his shoulders from stiffening up. Think about it, we're all using our legs in a very efficient manner, and getting tired, while Brian is
using only his upper body muscles for 100% of his propulsive power. He trained for this trip for months.

We were greeted just outside of Corvallis by our Corvallis host Bart Bolger and led in right to our destination.

Billy Kelly, Pat Tate and Arnie Arnet who caught up to us by car from California.

Jeff Chase doing some blogging on Michele Darr and Ben Hipp's home computer.
You can visit his site here: www.TwoWheelRevolution.org
Peace Activists Michele and Ben graciously hosted our stop and potluck in Corvallis -THANK YOU!!!

We all took turns telling a little story about ourselves. There were many experiences shared that ran the full range
of possibilities good to bad.

While we were sharing our stories, Geronimo finally caught up with us after a string of problems throughout the day.
Geronimo is from Arcata and is serving his country now.

New rider Ethan checking out loaner bike to join our ride. I had only planned on riding the first day,
so I issued my M1A1 Human Powered Machine to him for the next few legs of our journey. Cherie Eichholtz was scheduled
to take it in Portland in a few days. I was very sad that I couldn't make the whole ride myself due to work, but glad that
at least my bike could, powered by someone else.


Back to Ride for Peace

Back to Squadron13 Homepage

or...
check out Squadron13's newest creation: Veteran's Against Torture! 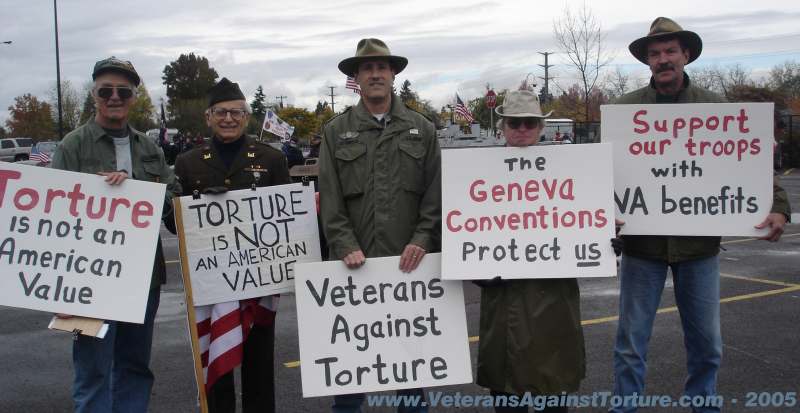